“#itsjustacup” references the controversial history of the Starbucks Holiday Cup. Sometime around 2015, the holiday design for Starbucks disposable cups became a focal point for misplaced American values. Each year, a new criticism arises on the design. The most notable was the infamous “Red Cup” which was later dubbed “Starbucks War on Christmas”. The idea being that Starbucks was intentionally snubbing Christians by not including any classic Christmas symbols. I found this entire “controversy” hilarious- not because of the cups themselves, but because the Starbucks cup has become so culturally loaded that this actually sparked an entire movement. The title of this piece is “#itsjustacup”- which was the trending tag on Instagram and Twitter at this time, where people shared their opinions on how ridiculous this whole thing was. Currently, this sculpture is made up of 24 various Starbucks cups, a majority of them being holiday designs. This sculpture is continuously growing in that every season I collect the current designs to add on. My hopes are to make this large enough to fill an entire room, where the quantity is able to represent the amount of people that feed into certain controversies, no matter how absurd.

This piece titled “Consent” is an interactive installation that consists of a small platform which contains a screen playing a soundless, vague video clip on a continuous loop. The clip is about 30 seconds long, and is of a young woman and man at a party. They appear flirtatious, touching each other's arms, head nodding and smiling. They are each drinking from red solo cups. The clip ends with the man leading her into a bedroom and the door closing behind them and the screen fades to black. Below the screen, are two buttons- where the viewer is meant to answer the question of whether the woman is saying “yes” or “no”. However, if the viewer selected “yes” a loud voice would scream “NO!” And vice versa. The power of interaction is crucial to this piece. Because the viewer makes a choice, they are in the position of being told they are wrong regardless of their answer. This often occurs when this topic of consent is brought up, resulting in an uncomfortable conversation.

Here we have another interactive installation which is made up of a functional gumball machine mimicking the mechanics of Instagram. Next to the machine is a heart shaped box filled with quarters- referencing the “Like” button we have the option of pressing to show our appreciation for certain posts. Upon inserting the quarter and twisting the metal knob, the machine rolls down a plastic ball and the viewer is able to remove it from the slot and open it up, revealing a single, random “instagram comment”. The comments are made up of digitally illustrated depictions of what a viewer would see if actually looking at the website or app. Each one contains a fabricated comment directed at the viewer, which can be anything of either positive, negative or sexual nature. The point of this piece is to represent how Instagram and other social media sites are seen as innocent apps which we use to pass time on a train, or to see what our friends are up to. But in reality, they influence our everyday lives through envy and the cliche “FOMO” (Fear Of Missing Out). Ultimately, they are corporations which profit off our need for validation.

“Mental Health Kiosk” is another interactive installation, which is representative of the dysfunction found in our healthcare system, particularly in regards to mental health. Displaying only three options: I’m Sad, ADD, and I Don’t Know- the option is selected and below is dispensed a gel capsule filled with glitter specifically colored to its corresponding health condition. Blue for sadness, Pink for ADD, and Gold for I Don't Know. Occasionally, the dispenser will give you the wrong pill. Or it won't come out at all, resulting in choosing another attempt with the same condition, or a completely different choice altogether. The entire kiosk underlines the many common issues people face when seeking help. They are either misdiagnosed, given improper medication, or not treated with urgency- which often yields detrimental results. 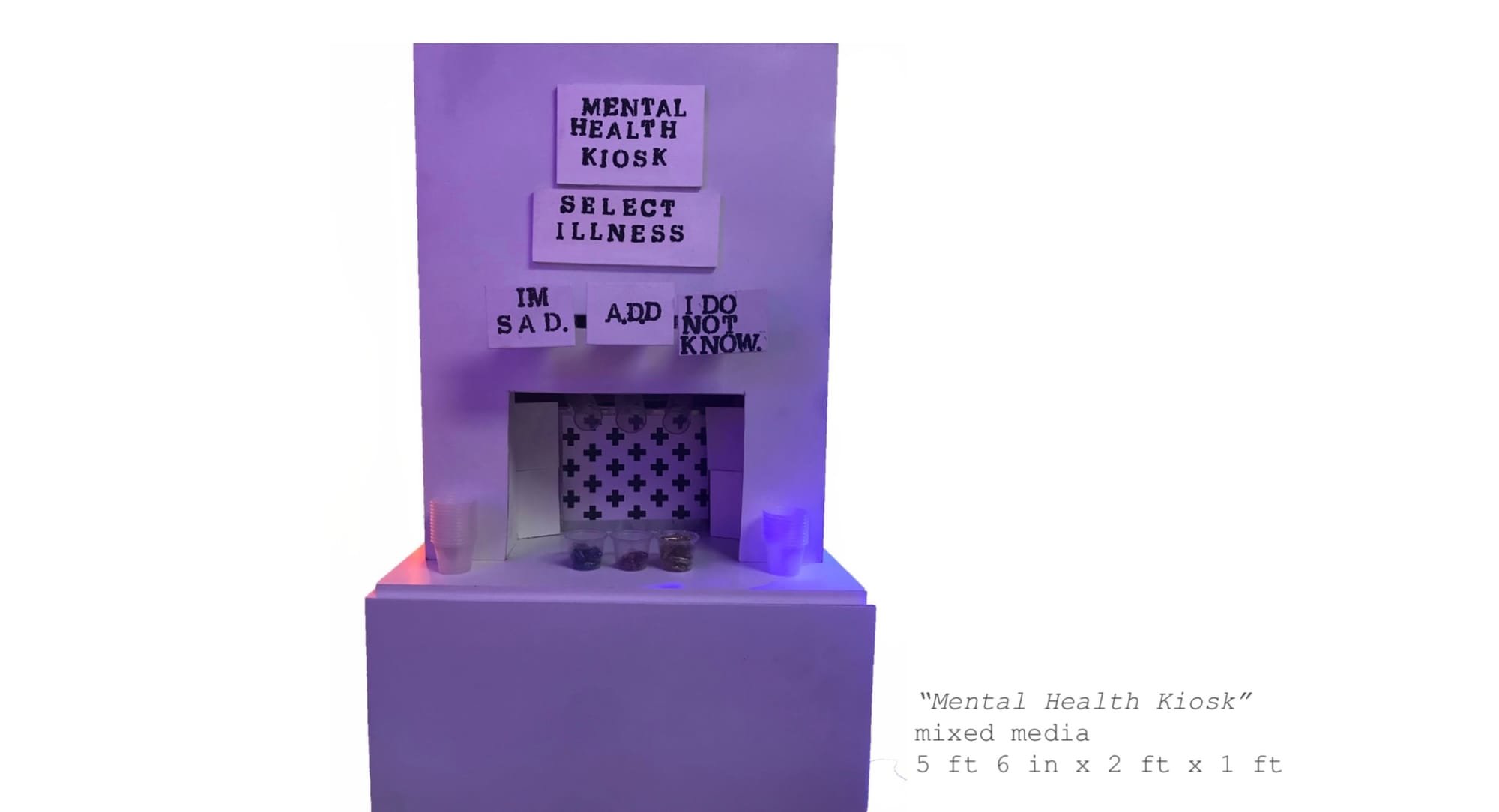 “Tan Lines” is an installation featuring a plastic white doll laying down in a booth, under a UV light. Next to the booth, is a tray of orange-flesh colored paint with a paintbrush and paint roller. The audience was invited to paint the doll, resulting in uneven strokes of orange and a satirical view on tanning and the occasional appearance mishaps that ensue. While creating this piece, I thought of how roles have reversed as time went on. In the past the upper class avoided darker pigmented skin in order to not be associated with their lower class counterparts, who received sun from working outside and in fields all day. Today, people strive for golden skin as it is connected to signs of wealth. Vacationing, sunbathing, free time, etc. This thought gave me the idea to begin referencing ideas and art-styles of the past, and connecting them to my contemporary sculptures.

“Milkmaid” is an automated sculpture consisting of an electrical pump system that cycles milk -like fluid through spouts located inside the nipples on the top half of the piece. A plexiglass sheet keeps fluid pooled within as it is separated through one of four tubes which lead into a row of pint glasses at the bottom. The fluid exits through holes behind the pint glasses, where it enters a cavity to be pumped back out. This piece is inspired by Johannes Vermeer’s “Milkmaid”, painted in 1658. Around this time, milkmaids and kitchen maids had a reputation as being predisposed to love or sex, and this was frequently reflected in Dutch paintings of kitchen and market scenes from Antwerp, Utrecht and Delft. Some of the paintings were slyly suggestive, like The Milkmaid, others more coarsely so. A representation of function vs fetish, my appropriation of Vermeer’s oil painting places emphasis on breasts being a symbol of femininity and their sexualized nature.

This sculpture is titled “Baggage” it focuses on how a woman’s sexual history becomes a messy burden to carry the more known that it becomes- usually resulting in being stripped of any “purity” or “cleanliness” by standards of society. Layers of “fluids” made from cured epoxy resin appear to be running off the hand and suitcase, acting as metaphor to show how an outsider would view a woman’s accruement of sexual partners, being both dirty and hard to ignore.

A 24 in x 24 in framed silicone depiction of acne-ridden flesh. Meant to be interacted with, the viewer is able to feel the bumpy terrain of the “skin” and even squeeze the center blemish, which causes a gooey pus to pop out. Acting as a play on baroque-style paintings, the framed effect allows for the extreme texture to create intense light and dark shadows, while the material itself displays a warm, dramatic palette. Baroque paintings are meant to be dramatic, direct and obvious, while also drawing the viewer to participate with the scene, with depictions that feel physically and psychologically real. 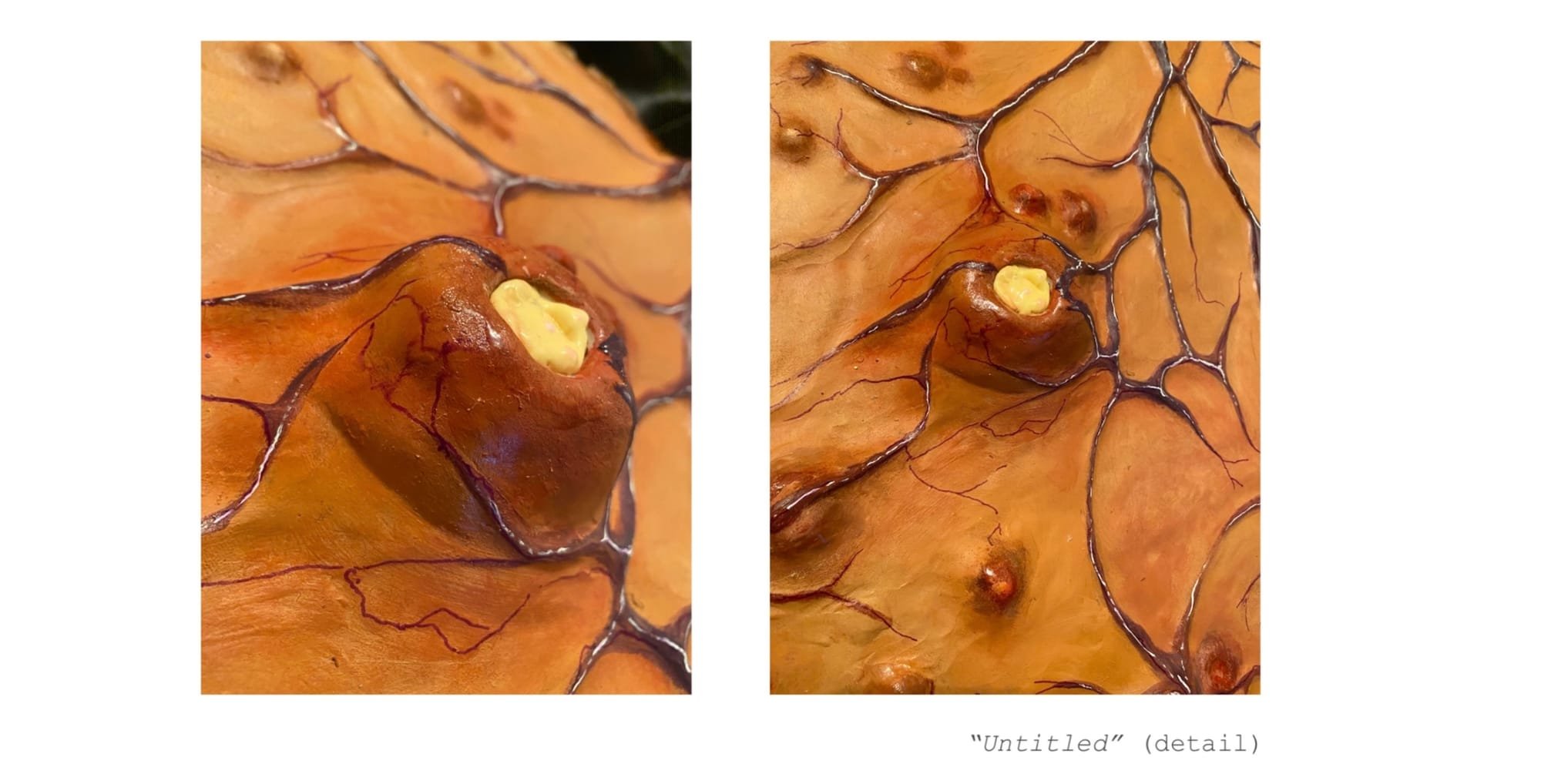 The history of self portraits can be dated back centuries, but became more frequently seen during the Early Renaissance in the mid-15th century. During this time, the art movement called for a gradual shift from abstract forms of the medieval period to the representational forms of the 15th century. This self portrait is represented by a used makeup wipe, the make up symbolizing the illusionistic painting techniques used to maximize “depth’ in a picture during this time period (just as makeup does to a face), while the blemish-ridden and hairy matte symbolize the naturalistic realism found in portraiture during the early Renaissance period as well.

A three piece series, which consists of three excessively hairy legs. Long red nails, which can be found in other pieces act as symbols of seduction. In modern times, smooth, shaved legs are considered attractive, whereas Ancient Greek and Romans attributed long hair on women’s heads - and bodies - to fertility and instinct. As if it were a primal trait that was passed on through the strongest of women. This series is inspired by a motif called a triskeles, which depicts a spiral of three legs. This motif can be found in Greek antiquity, beginning in archaic pottery, and continued on coinage of the classical period. The trinity represents the past, the present and the future. While the first piece represents the past, a leg overcome by hair. This piece represents the present, where the subject is choosing to shave. The third piece of this series is still a work in progress, but will depict a cleanly shaven leg with knicks and patches of missed hair, representing the future.

In her 1975 essay “Visual Pleasure and Narrative Cinema”, Laura Mulvey introduced the second-wave feminist concept of "male gaze" as a feature of gender power asymmetry in film. The concept was present in earlier studies of the gaze, but it was Mulvey who brought it to the forefront. Mulvey stated that women were objectified in film because heterosexual men were in control of the camera. Hollywood films played to the models of voyeurism and scopophilia. The concept has subsequently been influential in feminist film theory and media studies. However, in Judith Butler's 1990 book “Gender Trouble”, she proposed the idea of the feminine gaze as a way in which men choose to perform their masculinity by using women as the ones who force men into self-regulation. With “Glasses for Judy and Laura”, the “hippie” framed glasses act as a sort of invention to protect both sides of the viewpoint. The concept being that men would wear these spectacles in order to keep their male gaze from wandering too far. The condoms highlighting the male’s responsibility and burden to provide the contraception, even though it is meant to protect both (or all) participants.

As women strive for equality, the wage gap controversy continues. 81 pennies are used as the sculpture’s base to represent the average amount per dollar that women earn compared to men. However, arguments are made that this is an issue of circumstance. The education levels and other requirements for higher pay are simply disproportionate amongst women in certain fields. Referencing back to hair being a symbol of strength, this sculpture represents the idea of women overcoming circumstance in order to achieve true equality.